On This Page: The APS Camera / Three Imaging Steps / Our Competition / Scan Resolution / How to Order

The Kodak APS camera(Advanced Photo System) series was an early (1996) precursor to the eventual rise of the digital camera. It was designed to be easy to use - just drop the plastic film cartridge into the camera and close the door: 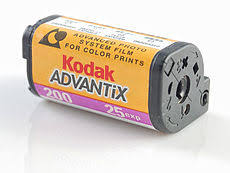 The film could even be removed from the camera before the entire roll was exposed, and then replaced in the camera to finish taking the remaining frames on the film at a later time.

The film was available in both print (negative) type as well as slide film, although the slide (transparency) version was apparently never very popular. The unique element was that the film included a magnetic coating that recorded data about the photo exposure. The camera also offered three different types of photos, distinguished by different aspect ratios of the images (width:height) - High Definition (16:9), Classic (3:2), and Panoramic (3:1)

Unfortunately, the camera was overtaken by the rise of digital cameras; Kodak ended production in 2004, and the film manufacturing was discontinued in 2011.

We can digitize your APS films of any type, any format. What's more, we can do it better (higher resolution) and at a lower cost, than the competition.

We use a unique, proprietary process to digitize your APS films. We don't scan the images. Instead, we re-photograph your images using a 24 MP digital camera equipped with a macro lens designed for extreme close-up photography. This provides a resolution of 4700 dpi (dots/inch) for the High Definition (16:9) format images. Other scanning services will give you images with 2000 dpi, or 4000 dpi if you are willing to pay a much higher price.

We convert negative images to positive images for just $0.44/frame ($0.39 if you just want the negative image). Transparencies (slides) cost just $0.55/frame Then, we will process and improve the image for an additional $0.50/frame. Here is what the three image stages look like (Digital Negative, Digital Positive, Premier Service):

No matter how many APS cartridges you may have, we can process them for you:

Our process is to put the contents of each individual cartridge into a separate directory. The number of the directory is indicated by a sticker on the film cartridge, so that everything is traceable to the source. The photo above shows just part of an order we processed for a Customer.

To request conversion services for your APS films, or any other photographic material, just fill out the Scanning Request Form. Oh- and by the way, if you happen to have owned other unusual cameras, we also scan Disc Films (or to be more accurate, we digitize Disc Films.)